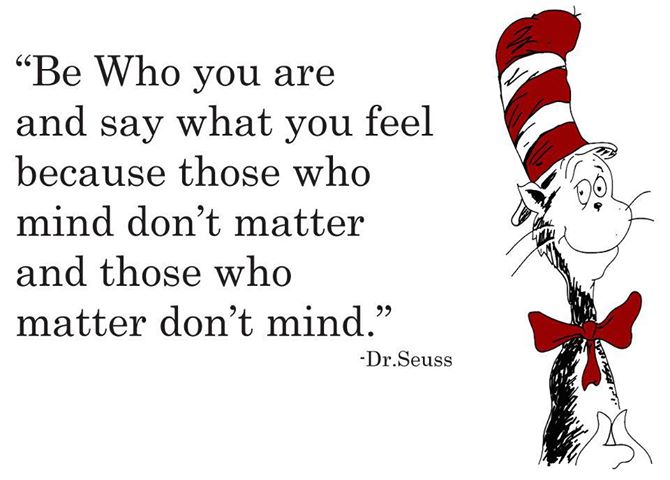 Dr. Seuss has said many things that have meant a lot to me over the years.  He was a wise man who had a wild imagination and a wonderful gift.  In today’s world, I think we could all use a little less judgement and a lot more Seuss!

I have noticed, far too much recently, that people are becoming so much less tolerant of uniqueness and originality.  They seem easily offended and demand to be catered to, far more now than I have ever seen in our past.  It is becoming harder and harder to stand out from the crowd than it is to just conform to the norm.  Its so much easier to hate something because everyone else is, than it is to do your own research and figure out where you, as an individual, stand on any particular subject.

Forming your own opinions is part of living, part of growing up, part of making a meaningful contribution to society.  Yet so many rely on what social media tells them, they just quit thinking for themselves, and its becoming increasingly alarming.

We live in an age of technology that both overwhelmingly enables us and yet also hinders us from making informed decisions.  An age where simple participation out weighs outstanding performance.  Where logic and original thinking are bypassed for likes and shares.  Where actionable contributions to society are whittled down to mere ‘thoughts and prayers’.

Am I a perpetrator of some of these atrocities?  I am, I whole heartily admit it.  But I also feel like that outsider looking in, wondering why no one else is waking up, bewildered at some of the statements my friends make and appalled at some of the decisions made by people who supposedly represent MY interests.

How did we get so lost in the sea of sameness?

There are a lot of things in this world that I can not control.  Yet there are so many more that I can control and I try my best to be an example of.  Some good, some bad, all me.  Whether you like me, follow me, respect me, ignore me or feel I’m a loud mouth cunt who thinks too highly of herself…you are all correct, because at the very least you have an opinion, one that I hope is formed by your own interaction with me, not one that was given to you by someone else.

I am a lot of things to a lot of people.  Wife, lover, opponent, guide, fool, teacher, coach, student, sister, brother, idealist, intolerable, insatiable, indestructible…just to name a few.  I am all of these things and more, because I choose to be.

I speak my mind.  I talk about things some people find inappropriate.  I love sex, and being married, yet know I could never be monogamous.  I enjoy the word cunt and hate the word average, I would rather be called one over the other and if you know me at all, you know which one.  I embrace violence like a warm blanket, yet hate that the world turns to it before trying to logically work things out.  I would rather fight with a sword than with a gun, I think it takes a lot more will to run someone through, than it does to simply pull a trigger, yet I don’t feel guns are the problem in this world. Have them or don’t, but if you do, know how to use them properly.

I am a fat girl.  I used to be a fatter girl.  Now, not so much, yet people judge me on my weight, my weight loss and my body all the fucking time.  So be it.  I judge myself by it all the time too.  Yet it is not everything that I am.   I am an American Indian, a bastard, a fighter, a geek, a gamer and an athlete.  All of which combined, form the basis of the woman I am, yet once people find out that I used to be over 450 pounds…that is usually what I become in their head.   It happens.  I can’t control that.  Your opinion of me is truly none of my business.

If that helps motivate someone in some small way I am so completely happy, you have no idea.  If my existence erodes the very earth on which you stand…so be it.  We all have people in our lives we enjoy hating.  Hell, I have an irrational hatred for an entire country simply because of one single person…I wish I didn’t, but I do, for now.  The point is, you will feel how you feel about people and that’s ok…as long as its YOUR feelings and not feelings based on a meme, or politics or for fuck sake…religion.  Don’t foist your feelings onto other people…again, their opinion of you, or me, is none of your business.

Society tells us a lot of things, how to live, who to love, what to wear, how to act, the list goes on and on.  But when you truly understand that you can “be who you are and say what  you feel because those who mind don’t matter and those who matter don’t mind” then you are above the curve.  Standing out, being original and making your own damn decisions is virtuous in and of itself.

Do it…and don’t feel guilty about it.

Because society tries to tell us how to be…we feel guilty about far too many things, simply because we are taught they are bad, and believe me that list is growing hand over fist, when it should be shrinking!

Embrace the You that you want to be.  Don’t be afraid to live outside the lines that box us into a certain category.  Don’t let society define who you are…some of the most genuine people I know are complete and utter assholes and they don’t try to hide that fact, they embrace it…and it works for them.  Define yourself and be true to your own ideals.

So whether you love me or hate me is perfectly fine…it doesn’t define who I am.  I’m going to be person I need to be to please me, not the world.  I will find ways to help make changes in this world as I can, regardless of likes, shares, thumbs up, thumbs down, swipe rights, swipe lefts or plain old kicks in the ass.

Always remember “You’ll never be bored when you try something new.  There’s really no limit to what you can do!”