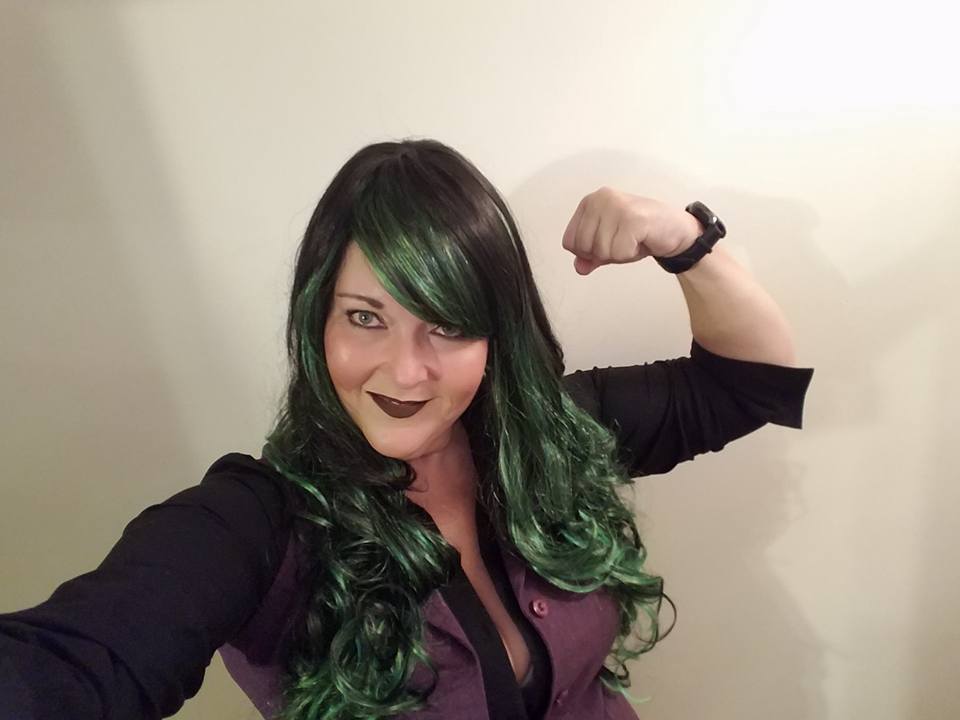 Recently I re-discovered a couple of my old running/fighting playlists and decided to use them during my runs when I am stuck indoors due to smoke in the air here in Utah because of fires locally and from California.

On Sundays I usually swim, ride and run on the same day, doing a pseudo triathlon, just to get my body used to the stress that is going to be put on it during the actual tri.  Two weekends ago I just happened to select an old run playlist that was filled with Disturbed and Godsmack tunes. I didn’t think much of it, other than I always appreciate the driving beat I get from my playlist opener which is “Avarice”.  I was a good 2 miles into my run when “Down with the Sickness” came on.  Then “Enemy Within” flowed into “Indestructible” and I was taken over.

I literally felt a presence inside me come alive and the imagery that came to my mind was that of She-Hulk ripping the exterior Amy down the middle and her emerging like a conquering Queen of Destruction.

My fighter side had returned.  With a vengeance.

Up until now, I really had not noticed a huge difference in my attitude or “presence” since I shifted my training to be more triathlon focused but when that playlist came on I could feel definite changes in my body and my mind.  Even the tilt of my head and eye level changed.  I was instantly back in predator mode and that really shocked me.

I have been reading “Chi Running” and learning how to change my running stance to support a more relaxed running experience.  I’ve also been doing Tai Chi during my Miracle Morning and learning to focus on my Meridian System and enhance my qi or “life force” energy.  So when my body responded to the music as it did, it was quite a shock to my system. It took all my focus to force my body to relax and to center myself again.

I hadn’t really associated what was going on with the music and I kept having to force myself to relax and loosen my muscles throughout my body.  My run ended soon after this experience and I really didn’t put two and two together until the next weekend.

On Sunday I had a swim lesson first thing, so I spent an hour in the pool doing drills with my brother taking video and showing me what I should change and what my next 2 weeks of drills would look like.  Then, I get changed and hop on the bike, and go for my normal 9 miles, keeping my RPMS above 98.  Then, I hop off the bike and onto the treadmill so that I don’t have more than a couple of minutes between the shift from bike to run.

I normally don’t listen to music on the bike.  I can’t do that on the road so I don’t do it in the gym, but when I run, I do put at least one earbud in, because it helps me keep a good cadence going.  So, again, the Disturbed/Godsmack playlist came up. I hit play and  “Indestructible” came on.

BOOM…there she was.  My She-Hulk.  This time it wasn’t her ripping me apart, she just overtook the Me, in my mind’s eye.

At this point, I realize the music is what is bringing this all on. So, I go with it.  I let her shake out a little bit, and we get into the rhythm of our run…and then I begin to make changes in my body and my tension. The minute I feel like I am able to relax my arms and legs, a new song comes on and it affects me again.  So I start over.  Slowly, mentally working through my body and intentionally relaxing my muscles.  It’s harder than it sounds, but, in a way, it was also easier than when I was running without her.

Now, I know…all this sounds kind of crazy.  But we all have that driving force in our head that pushes us to do things, that kind of ‘protector’ that takes over when we need it to.  That is my fighter side, who just happens to take the form of She-Hulk in my head.  (I know, you’d expect an epic Valkyrie, with winged helmet and glowing armor…but no.  It’s She-Hulk).

In past blog’s I have mentioned how emotional I got when Bruce Banner talks about his ‘secret’ in The Avengers…and how he is ‘always angry’.  I tear up, even now, not because I am angry all the time, but that violent side of me has always been a part of who I am, whether people understood it or not, it just…was.  So that scene will always have a special meaning to me.

Learning to harness the multifaceted nuances of my inner She-Hulk could quite possibly be a book in and of itself (I can picture that as a title already).  Explaining the fact that my inner being (child, demon, presence, whatever you want to call it) is She-Hulk might be a little more time consuming, but this is how my brain works & thinks about things lol.

I have spent some time the past couple of days realizing how out of balance I have been because, for a lack of a better word, I had put her away.  I didn’t think I needed to have the fighter side of me come out when there weren’t any fights to prep for.  I wasn’t constantly in a predatory state of mind any longer.  I relaxed.  I got used to a certain routine that didn’t involve a lot of lifting and shifting of muscle.  Tri’s are a very different sport but that drive, that need to compete is still there and that’s what pushes me towards my goals.  Always.

So finding a balance between fighter and runner is going to be interesting, to say the least.  As I said, running WITH her in my head was much easier because I wasn’t constantly trying to bring my drive up to speed…it was just THERE.  I like having that urge to compete and push there, and always at the ready.  I just need to figure out how to do both, if I can.  I was much more comforted in trying to calm the She-Hulk than running without that predatory sense.  It doesn’t feed my drive nearly as well, but it IS much easier to relax, for now.

I guess it all really is about balance.

We will see how it goes the rest of this month and into September when I actually WILL be fighting.  The tournaments at DragonCon are always a good time and it’s pretty safe to say that I am in perma-predatory mode during the Con just because I feed off the energy there…but even as a super extrovert, I can get overwhelmed by the 80 thousand people that show up during the convention.

So perhaps it’s a good thing she is coming out to play a little early!